The Network Obfuscation and Virtualized Anti-Reconnaissance (Nova) System is an open-source software tool that detects network based reconnaissance efforts - denying the attacker access to real network data while providing false information regarding the number and types of systems connected to the network. 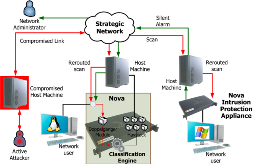 In any intrusion, the attacker must first perform reconnaissance to learn everything possible about a network such the number of systems online, the operating systems installed, the services running on the machines, and the open ports.  Each piece of information gained is a step closer to a successful attack.

Nova prevents and detects this snooping by setting up a large network of realistic virtualized decoys.  Trying to find the real machines then becomes much like trying to find a needle in a haystack.  Meanwhile, Nova identifies the attacker by the inevitable suspicious activity in communicating with decoys, and alerts the network administrator.

Nova is ideally suited for internal IPv4 LAN networks.  Nova can be used to detect hostile activity from entities that are not supposed to be on the network, internal threats from employees, or machines compromised by malware.  It works on networks where reconnaissance should not occur, including your private home network behind a NAT or Virtual LANs on a corporate enterprise network.  Nova does not directly obfuscate or protect internet facing servers, but instead is designed to safeguard private servers where reconnaissance activity should be considered unusual and a sign that something is amiss (unlike the case of public facing servers, where reconnaissance is rather common because external threats are not unusual).

The Government and commercial sectors are both under constant cyber attacks by domestic and foreign interests who seek to access sensitive information.  Nova provides a means for providing false information to attackers, thereby limiting their ability to attack the network.